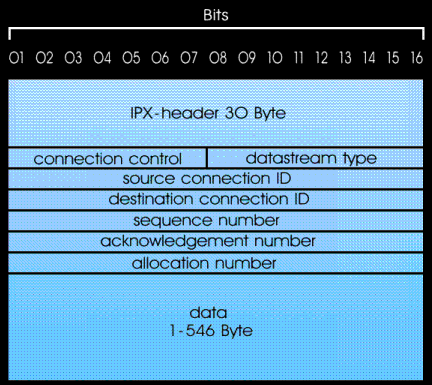 Structure of the SPX data frame

The relationship of SPX and the Internetwork Packet Exchange Protocol (IPX) is the same as that of the TCP protocol and the IP protocol. SPX increases the reliability of transmission by flow control, verification of delivered data packets by sequence numbers, and correctness of transmission by acknowledgment numbers. It is embedded in the IPX protocol and has transport-only functions. The application-related Novell protocols are based on the SPX protocol. For example, the NetWare Core Protocol( NCP), the Service Advertising Protocol( SAP) or the RoutingInformation Protocol( RIP).