Storage architectures are designed to optimally meet the various requirements for storing programs and data. The storage hierarchies that build on this are concerned with access times, data spin-off and medium- and long-term archiving. From this catalog of requirements, a storage hierarchy has been formed consisting of primary storage, secondary storage and tertiary storage. 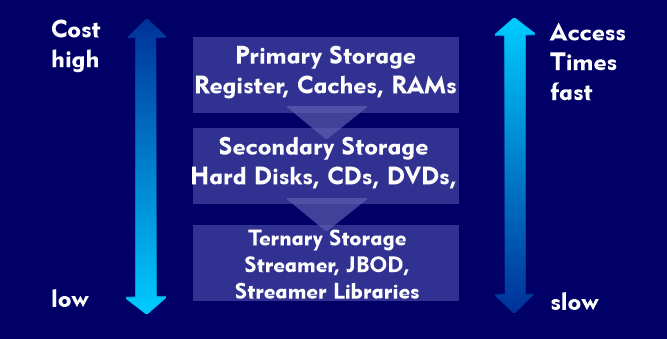 The secondary memory has a much higher storage capacity compared to the primary memory. It is a permanent memory that can store data for a long time. However, the access time is slower. Hard disk drives( HD), solid state drives (SDD), flash memory and optical storage such as compact discs( CD), DVDs and Blu-ray discs( BD) serve as secondary storage. Previously, other secondary storage media included mechanical storage such as punched cards and punched tape, and floppy disks as magnetic storage.