Run Length Limited (RLL) is a recording method for hard disks and tape drives. Compared to the older MFM (Modified Frequency Modulation) method, the RLL recording method has a storage density that is about 50% higher.

The RLL method groups bit groups together and combines them in such a way that patterns are created from the magnetization directions. In the various methods, the time intervals between two "1" bitvalues and the number of "0"bits in between are determined from the two parameters Run Length and Run Limit. The smallest permissible number of bit positions can be derived from the Run Length, and the largest permissible number of bit positions between two flow changes from the Run Limit. If the run length is too long, misinformation can occur due to jitter. Therefore, the number of "0" bitsequences is limited. 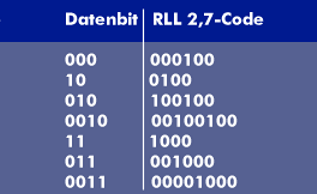 There are several RLL procedures characterized by the number of zero bits. One of the most commonly used procedures is the RLL 2,7 code. In this code, there must be a minimum of two and a maximum of 7 zero bits between two "1" bits.

The further development of RLL is ARLL (Advanced), which has a higher recording density.