ROT13 is a simple encryption method used to encrypt potentially offensive passages in news articles on the Internet. 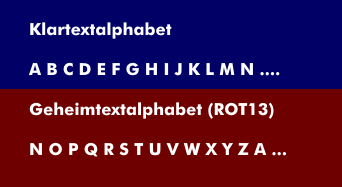 Plaintext and ciphertext alphabet in substitution cipher with ROT13

With the appropriate decoding command, any newsreader program can decode these passages. ROT13(Rotation 13) is mainly used to make passages unreadable.

The ROT-13 method is a simple substitutioncipher, also known as Caesar cipher, where each letter of a message is shifted by 13 characters. Since the Latin alphabet consists of 26 letters, the encrypted letter shifts by half the alphabet. An A becomes an N, B becomes an O, O becomes a B, or Z becomes an M. This is where the name Rot13 comes from: rotate by 13.