Traffic information, Road Traffic Messages (RTM), is intended to improve traffic flow and indicate traffic bottlenecks such as road works, accidents and traffic jams. In Germany, this information has so far extended to the autobahns and certain federal highways in conurbations.

Traffic information is broadcast as traffic news on radio, but is also presented visually on television. In addition, there are certain data services with which traffic reports can be transmitted via existing radio stations and displayed on smartphones and tablets. Well-known methods are the Automobile Radio Information(ARI) and the Digital Traffic Message Service( TMC). Since both methods have certain limitations, a more advanced approach is being developed with the TPEG service, Transport Protocol Exchange Group (TPEG). One that offers higher spatial resolution than digital traffic radio, includes federal and state highways, can be used in inner-city areas, and also supports location-based services. In addition, such a service must also work in other European and, better yet, non-European countries.

The source of traffic information 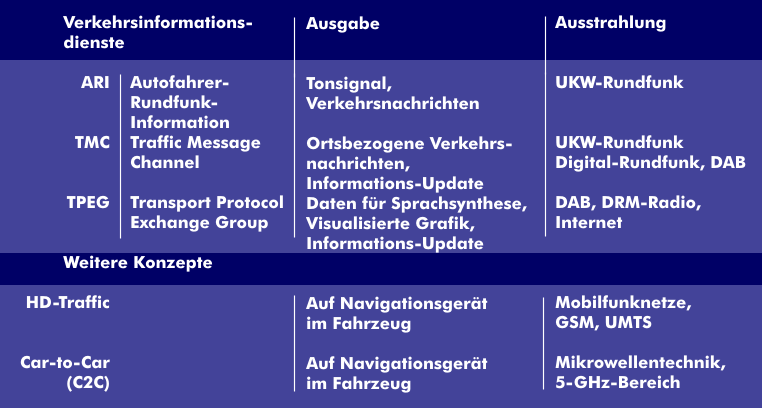 Traffic information is generated by various acquisition data that measure the traffic flow on highways and transmit the measured values to the traffic control center. Induction loops and stationary acquisition systems( SES) on highway bridges act as measurement sensors. In addition, there are mobile congestion detection systems such as the Floating Car Data( FCD), as well as information from the police and road users.

The Europe-wide TPEG approach also takes into account inner-city induction loops, parking garage occupancy, and other stationary detection systems. It also includes location-based services such as local weather overlay, public transport information, etc. This approach is so broad that the variety of data can be selected according to service offerings and, using speech synthesis, can serve acoustically, as visualized graphics on displays or PDAs, and as information updates for the navigation system.

In addition to the traffic information services mentioned above, there are other concepts based on movement and driving speed. One such is HD-Traffic, designed by navigation system provider TomTom. This system works with movement patterns of mobile phone subscribers. The location data is transmitted via the mobile networks and the driving speed and direction are determined from this. Once the traffic data has been calculated, it is transmitted via the cellular networks to the navigation devices in the vehicles. Other concepts rely on car-to-car communication( C2C) and car-to- infrastructure communication( C2I), in which road users exchange traffic information with each other or with radio beacons.