Resonant circuits are electronic circuits consisting of a series or parallel connection of capacitors and inductors which operate according to the resonance principle. Depending on the arrangement of the inductance and the capacitance, a distinction is made between series and parallel resonant circuits.

The resonant circuit principle is based on the fact that the capacitor is charged, generates an electric field and, when discharged via the coil, builds up a magnetic field in it. Since the magnetic field can only be maintained by an influx of current, after the capacitor no longer supplies any further current, it collapses and generates a counter- induction that charges the capacitor in the opposite polarity. This process repeats continuously and is only terminated by the damping of the oscillating circuit components. 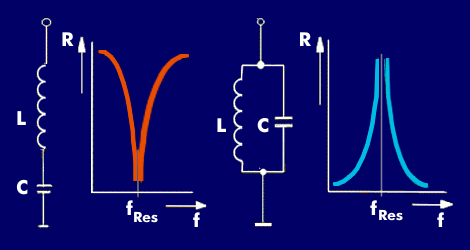 Parallel and series connection of oscillating circuits and their resonance characteristics

The frequency at which charge is exchanged between inductance and capacitance is the resonant frequency of the resonant circuit. It is given when the two reactances are equal. Since the resistance of the inductance increases with increasing frequency, while that of the capacitance decreases, there is a frequency at which both resistances are equal: X(L) = X(C). This is true for both series and parallel connection of inductor and capacitor.

Formula for calculating the resonant frequency of oscillating circuits

Resonant circuits are used for narrowband filters and in oscillators for frequency generation.