Request for Comments(RFC) are specifications, proposals, ideas and guidelines that affect the Internet. They are published in RFCs. Since 1989, the structure and composition of RFCs have been governed by RFC 1111. As a member of the Internet Architecture Board( IAB), an RFC editor coordinates the publication of the respective RFCs as well as their distribution on the network. RFC documents are managed by the Information Sciences Institute at the University of California (USC- ISI).

Each RFC has a specific status with which it is marked. If a protocol is submitted for review, it is given the status Initial. If the protocol is proposed as a standard, it has Proposed Standard (PS) status. A Proposed Standard is a proposed standard that is limited in time to 2 years. Draft Standard, which is a draft standard, is the status once it has been implemented in at least two independent implementations. A Draft is only valid for a limited period of time, maximum 6 months, after which it must be updated, replaced or it may not be reapplied. Once a draft has beenreviewed and approved as a valid standard, it has the status of standard. Since some RFCs describe protocols that have been replaced by better ones, the old protocols continue to be listed with the addition Historic. Furthermore, protocols that are in the experimental stage have the addition Experimental 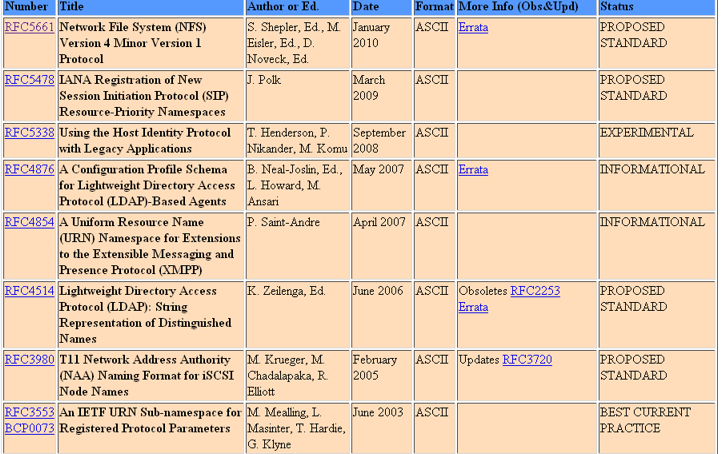 Status of the various RFCs

Protocols from other standardization bodies or company developments are also marked with Informational or Best Current Practice (BCP). The Best Current Practice status refers to procedures and protocols that have proven themselves in practical use. If an RFC is declared a standard, it is given the attributeSTD; if an RFC has only an informal character , it is given the attributeFYI, For Your Information. The RFC status For Your Information means "For your information" and is used for non-technical standards or descriptions of protocols.