The Realtime Transport Protocol(RTP) was developed by the Audio-Video Transport Group of the Internet Engineering Task Force( IETF) and is part of H.323. It is located on the transport layer and can handle network-based video or audio communication. The RTP protocol distinguishes between different encoding formats so that the transmitted data can be used independently of the application. Different RTP profiles for audio and video are defined for this purpose.

The RTP protocol is independent of the underlying protocols, it is usually operated with the connectionless User Datagram Protocol( UDP), whereby the RTP data packets are built into the UDP data packets. 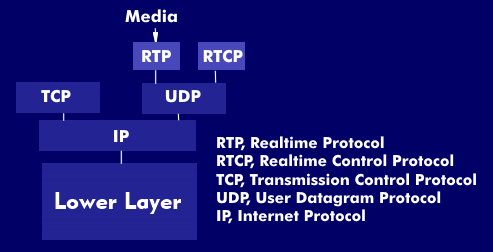 RTP and RTCP protocols in the layer model

The RTP protocol establishes an end-to-end connection with real-time transmissionand supports unicast connections but also IP multicast. It detects and corrects missing, duplicate or incorrectly sequenced data packets. In the RTP header, in addition to various data fields for the version and padding, there are two data fields for the unique identification of the data sources and the source addresses. The status information of the sources is reported back by the RTCP protocol, which is part of the RTP protocol, by periodic transmission.

The RTP architecture has two components: the mixer and the translator. The mixer supports multicast applications and mixes similar data streams from multiple data sources. The translator translates data from one format to another.

The RFC document RFC 1890 from 1996 defines the syntax and basic semantics of the RTP protocol, which also exists in a secure version as Secure Realtime Transport Protocol( SRTP).