The Realtime Control Protocol (RTCP) is used to control the Realtime Transport Protocol(RTP) and, like the latter, is part of H.323. As a transport protocol, the RTCP protocol knows the coherence of the transmitted RTP sessions.

Thus RTCP regulates the QoS properties with a QoS feedback. Here, the receiver sends the quality of service (QoS) status with which a stream was received and the related transmission properties such as delay, packet loss, jitter, and others to the sender. This allows the receiver to modify transmission mechanisms and counteract possible degradation of the quality of service and, for example, optimize the voice stream in Internet telephony( VoIP). The network status thus directly affects the application. 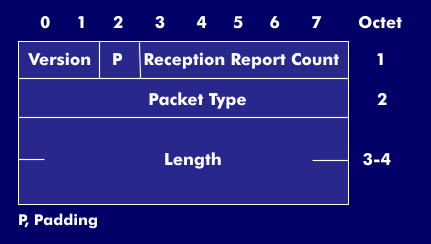 In addition to pure status information, RTCP also handles session control and synchronization between different data streams that belong to the same session, as is the case with video and audio sessions.

The RTCP header consists of the 2-bitversion field and the padding (P) data field. If this is set to "1", then the RTCP data packet contains some additional padding octets. This is followed by the Reception Report Count data field, which contains the number of Reception Report data blocks, and the 2 octetlength field, which contains the length specification of the RTCP data packet. The RTCP protocol dates from 1996 and is described in RFCs 1889 and 3350.