For 3D rendering of objects with realistic light-shadow effects, with reflections and refractions, there are several rendering methods. Ray tracing is one, phong shading another.

As far as ray tracing is concerned, it excels in rendering all visible and non-visible light reflections and surface shading in detail with extremely high computational effort. However, the display possibilities for photorealistic representations are limited in that ray tracing does not take ambient light into account and also does not sufficiently consider the reflection of matte surfaces such as those of walls. The former affects realistic contrast reduction between illuminated and shaded areas. These two drawbacks are remedied by the Radiosity method. 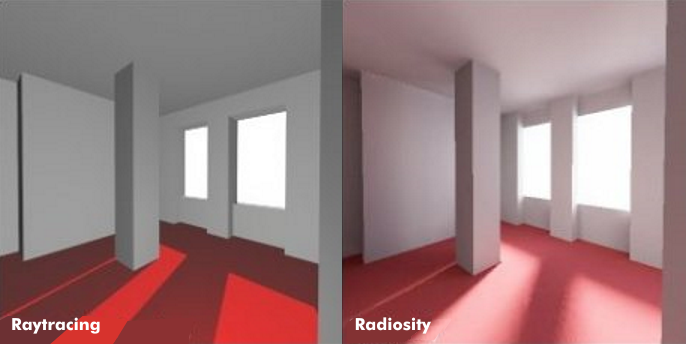 Radiosity divides the scene into several sub-areas and calculates how the radiated light from the objects in one sub- area affects the objects in another. Once the individual sub-areas are calculated, they are scaled down and calculated again, until the calculation is based on pixel size. Both visible and non-visible parts of the image are included in the calculation. This softens the edges of the shadows and makes visible parts of the image that are not directly illuminated by light. The radiosity technique also has the advantage that the calculation values can continue to be used as the user moves through the object world, as long as the illumination sources do not change. This makes the radiosity technique especially interesting for architectural representations where the viewer can move through the buildings as if in virtual reality.

The disadvantage, however, is that the computational effort is still much higher than that of ray tracing.