In mobile communications, the user and control data are exchanged between the transmitter and receiver via radio equipment. The smallest geographical radio coverage area of a cellular radio network is called a radio cell. This radio coverage area is served from a base station. The shape of the radio cell is optimized in such a way that it results in a periodically recurring structure.

The radio cell size is determined by the coverage concept and is directly dependent on the transmitting power of the base station. The size of a radio cell or the coverage radius of a base station depends on the propagation characteristics of the radio signal used in each case, the geographical conditions and the mobile communications capacity required at the location of the base station, which is derived from the number of subscribers to be covered. For example, intelligent radio cells, smart cells, with a small footprint are found in metropolitan areas; in rural areas with low population density and a flat geographical structure, radio cells with a much larger footprint are used. Due to the different propagation characteristics of the radio signal, D-networks operating in the 900 MHzfrequency range, for example, have a cell radius of up to 40 km, while E-network radio cells at 1.8 GHz serve a radius of up to 10 km. 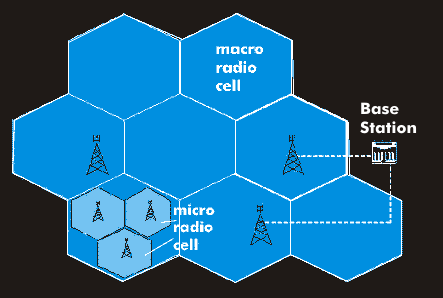 The size of the radio cell also depends on the traffic capacity of the mobile subscribers, since a base station can only provide a limited number of radio channels. Therefore, if a very high traffic intensity can be assumed, as is the case in inner-city areas, airports or train stations, then several radio cells with smaller ranges are set up. 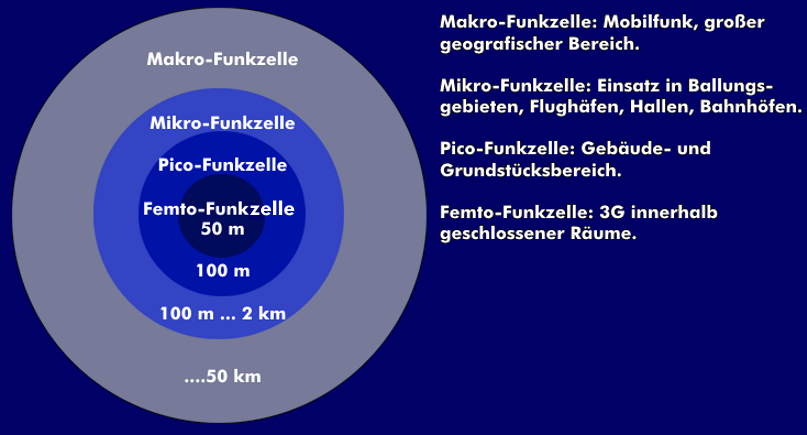 Use and extent of the various radio cells

Depending on the size of the radio cell, a distinction is made in mobile communications between microcells and macrocells. The extent of microcells is between 100 meters and two kilometers and that of macrocells between 2 kilometers and 40 kilometers. In the in-house sector, there are also picocells and femtocells with an extension of up to 100 meters. These are used for cordless telephony( CT, DECT), WLANs and UMTS. The smaller radio cells - femtocells, picocells and microcells - are smart cells that are combined to form clusters for better radio coverage of a geographical area and to increase network capacities.