The power factor (PF) is a measure of the inductive or capacitive load, which is expressed in the phase shift between current and voltage for sinusoidal voltages. Mathematically, it is the quotient of active power (P) and apparent power (S). This quotient is denoted by the Greek letter 'lambda' and corresponds to the cosine 'phi' between the two powers.

The power factor can take values between 1 and 0 depending on whether the load is a resistive load, a reactance, i.e. a purely inductive or capacitive resistance, or impedance, which consists of an effective resistance and that of a reactance. In the case of a purely resistive resistor, the voltage and current are in phase, it is an active power and the power factor is "1". This power factor occurs in electric heaters and incandescent lamps, among others. 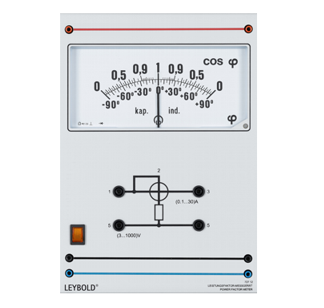