Polygons are polygons: triangles, quadrilaterals, other polygons, and polygons in concave or convex form. They are used in computer graphics for the representation of surfaces and bodies and are defined by any number of vertices.

In a polygon, adjacent vertices are connected by lines that form the edges of the polygon. In the two-dimensional Cartesian coordinate system, a polygon consists of at least three vertices. Their positions are uniquely defined by the XY coordinates. In the three-dimensional coordinate system the surface XY-coordinate values are supplemented by a Z-value. 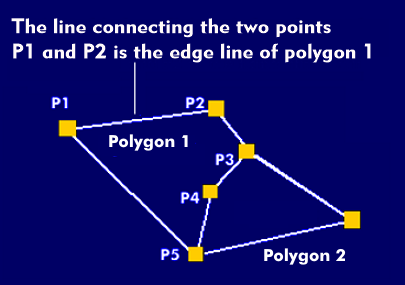 A polygon always forms a surface closed in itself, which lies in a plane. For curved bodies, the surface is approximated by several smaller polygons or formed by curved polygons. The polygon with the fewest points and edge lines is the triangle. If several polygons are connected with each other, then at least one edge line must belong to two polygons at the same time. This is called a polygon mesh.