In point-to-point encryption (P2PE), encryption is performed between two network components of the transmission link, i.e., on a partial link.

The data is encrypted on each link by the sending server and decrypted by an intermediate network node. They are then available in plain text and are again encrypted by the network node for the next leg for transmission to the client. 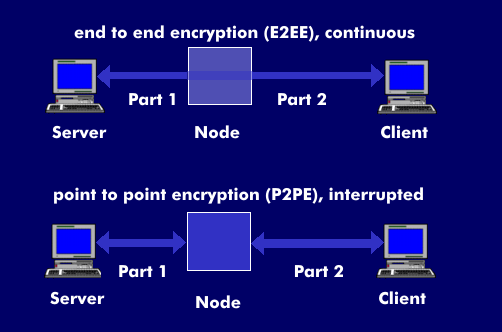 Point-to-point encryption can use the same encryption methods as end-to-end encry ption( E2EE). For example, data can be encrypted on all sub-routes using the TLS protocol, Transport Layer Security (TLS), and decrypted and encrypted in the exchanges, a base station, a radio access point or network nodes.