Point of Load (PoL) is a power supply concept in which line losses and voltage fluctuations due to current peaks in the supply lines are to be avoided. The supply lines are therefore kept as low as possible and routed to the vicinity of the high-power processors.

Since high- performance processors sometimes require high supply currents of several hundred amperes, the supply current is only provided in the immediate vicinity of the processors. Up to this point, the point of load, high voltages are used, which are then converted to a lower voltage by a DC/DC converter. Depending on the processor concept, this can be as low as 1 V. In PoL circuits, a regulated, low- noise, feedback-free voltage is generated from the general supply voltage for the corresponding high-performance electronic semiconductors such as microprocessors or ASICs. This is done with one or more DC/DC converters, each of which generates individual voltages. 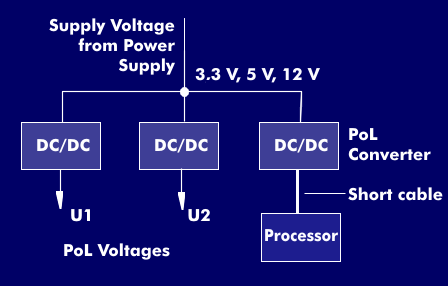 PoL technology moves the voltage regulation of the supply voltages close to the high-performance processors or to the power-on- chip devices, which require their own voltages but, above all, high currents that may well be several hundred amperes. As a result, the highest energy losses occur in the last few centimeters between the PoL converter and the processors. This is dissipated by heat and worsens the efficiency of the PoL converters. PoL circuits can be constructed as analog circuits from discrete components or as PoL modules. They are used in a wide variety of supply voltage architectures such as Digital Power, in the Distributed Power Architecture( DPA) or the Intermediate Bus Architecture( IBA). The connections to the pads of the power chips are made via the Power Distribution Netzwork( PDN). 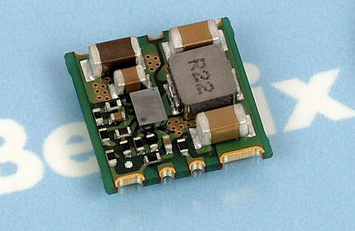 PoL converter for FPGAs from Bellnix

The Distributed-Power Open Standard Alliance (DOSA) has defined standards for PoL voltages so that customer applications can be simplified and developers can choose among PoL modules from a wide variety of manufacturers. DOSA specifies input voltages between 2.4 V and 5.5 V and 4.5 V to 14 V, as well as for 48-V on- board power supplies. Programmable single output voltages generally range from 0.591 V to 6.0 V.

In newer PoL concepts, the PoL converters are routed directly into the housing of the high-power components.