The parity check(PAR) is a relatively simple test procedure for error detection during data transmission and data storage of binary data. It is used in all data storage media such as main memories, hard disks, solid-state drives and tape drives and detects errors in data blocks. It is not used for error correction.

Parity checking determines the number of "1"bits in a byte or data block and, depending on whether it is an even or odd parity check, adds a paritybit, the eighth bit of the byte, to the data block. For example, if there are four 1's bits in a data block, then a "1" is added as the parity bit for an odd parity check because the cross sum of the bits must have an odd parity. For even parity, a "0" is added because the cross sum of the four 1s bits already has an even parity. The parity check can refer to consecutive bits, as just shown, then it is the check of the longitudinal parity. However, it can also refer to the parallel bits, in which case it is referred to as transverse parity. 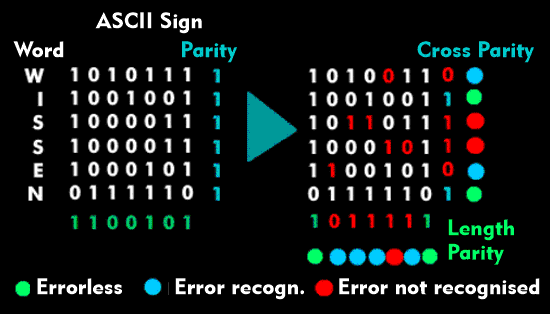 The parity check is best suited for simple errors when a bit with valence 0 is corrupted during transmission or storage into a bit with valence 1, or vice versa. The error detection is then unambiguous, even if another odd number of bits is corrupted. However, if an even number of bits is corrupted, then the error cannot be detected. If several bit errors occur in one data block, the parity check fails. The redundancy can then only be improved by adding more parity bits. Therefore, the test method is only reliable to a limited extent. This weak point can be remedied by shortening the transmitted block length or inserting a parity bit more frequently.