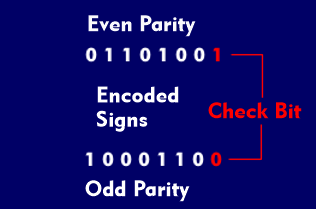 Check bits for even and odd parity of encoded characters.

The parity bit is added to the data bits on the transmit side, making the bit sum even or odd. On the receive side, the bit sum ischecked. If the received bit sum does not correspond to the specified parity - which must be even, for example - then a transmission error has occurred. Even parity is given when the added bit makes the total number of ones in a data unit even. If the parity bit is always 1, this is called mark parity.