Multiple access methods allow single or multiple orthogonal subcarriers to be assigned to different users. Via the allocated time slots of TDMA and the subchannels of FDMA, the transmission capacity can be adapted to the user requirements. Thus, a subscriber making a phone call is assigned a lower bandwidth than one watching Internet TV. 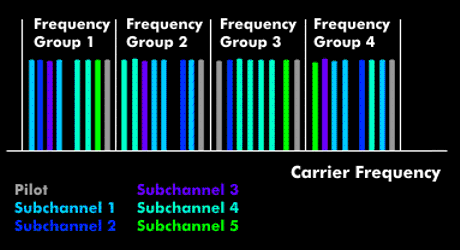 The OFDMA used in WiMAX has a flexible number of carrier frequencies compared to OFDM. Whereas OFDM uses 256, OFDMA can use 128, 512, 1,024 or 2,048. The coding, modulation and amplitude are set separately for each subchannel, depending on the channel conditions. This means that the transmission power can be optimally adapted to different transmission conditions.

OFDMA provides for the assignment of the more or less many subcarriers of a radio network to the different Radio Network Terminations( RNT). This function compensates for symbol rate interference and local oscillator( LO) frequency deviations. Since the frequencies of the local oscillators can vary considerably due to aging and temperature, the OFDMA function ensures the reference to a subcarrier.