The optical computer mouse works with light-emittingdiodes and photodiodes and replaces the classic computer mouse with the roll-off mechanism with this optical scanning technology. There are different methods for beam generation. It can be generated by a light-emitting diode or, as in the case of the Bluetrack method or Blue Wave method, by a blue laser. The photodiodes that detect the reflected light serve as light sensors.

Optical computer mice are characterized by a high resolution. This is adjustable and depends on the application. It can reach values of over 3,000 dpi. With computer mice for computer games also 'values of 30,000 dpi are realized.

Functionally, the optical computer mouse scans the surface with a light-emitting diode( LED), which is located on the underside of the mouse, and converts the movement into electrical pulses. The optical mouse contains two light barriers for the two axes in the horizontal and vertical directions of movement. The light from the light emitting diode is shone onto the background, reflected there and converted into an electrical signal by a photodetector. When the mouse is moved, the reflected light is displayed in pulse form. The method offers a relatively high resolution and is more reliable in terms of positioning than the method with the rubber ball. 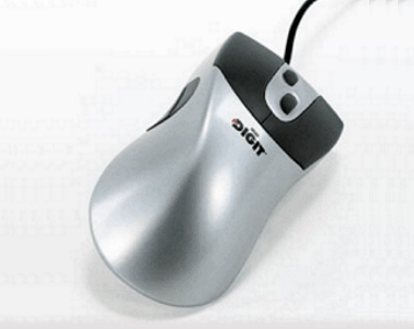 Another method works with an optical sensor that takes several hundred images per second of the work surface and calculates the coordinates from the motion sequence. The resolution depends on the number of scans. These are several thousand per second. The resolution and the sampling rate result in bandwidths of over a hundred megahertz.

In the Bluetrack, the light-emitting diode is replaced by a laser diode that emits short-wave blue light. The reflected laser beam is directed in a mirror optics onto an image sensor, where it is converted into electrical signals. The bluetrack method is characterized by a higher resolution because of the short-wave light. Optical mice usually have several buttons and a scroll wheel, which is ideal for line-by-line navigation in documents and on the Internet.

The optical computer mouse can of course also work via radio as a wireless mouse or via Bluetooth as a Bluetooth mouse.