Cost allocation for individual users can be done based on various line parameters such as tariffing, bandwidth used, load volume, and others. These parameters can also be used for metrics, allowing flexible and differentiated routing.

OSPF works according to the link-state algorithm( LSA) can bridge large distances with more than 14 intermediate systems and group subnets together. In total, OSPF can route data packets across 65,000 routers. 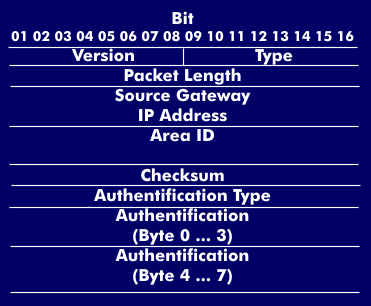 Data frame of the OSPF protocol

The routing algorithm underlying the OSPF protocol is the shortest path first ( SPF) algorithm. The dynamic routing of the OSPF protocol uses a database in which the adjacent topology is stored for optimization. Based on this topology, each router generates a hierarchical tree topology, the shortest path tree, in which each destination is entered with the shortest route. The tree structure is subdivided into the layers networks, a group of networks, the so-called area, of backbones, which connect the areas with each other, and autonomous systems, which represent a summary of all networks connected via the backbone.

Communication between routers takes place through an authentication mechanism in which only authorized routers can participate. Routing information from other routing protocols is forwarded transparently.

Structure of the OSPF header

Besides the classic OSPF there are two other versions: OSPFv2 for IPv4 and OSPFv3 for IPv6. OSPFv3 is based on the previous version OSPFv2 and retains most of the routing mechanisms present in it. The enhanced features relate to addressing semantics, which have been removed from OSPF data packets and link-state algorithms (LSA) and replaced with new link-state algorithms for transporting IPv6 addresses. Classic IP-based OSPF runs on a link basis under OSPFv3, rather than an IP basis. Authentication is no longer performed by the OSPFv3 protocol, but by the Authentication Header( AH) of IPv6.

Open Shortest Path First (OSPF) is a specification of the Internet Engineering Task Force( IETF) and is described in various RFCs. Version 3, OSFPv3, is described in RFC 5340.