A Next Generation Network (NGN) is a network concept characterized by multimedia and real-time communication. NGN is a network construct in which the various existing network concepts such as the analogtelephone network, POTS (Plain Old Telephone Service), digital circuit-switched, cell-switched and packet-switched, mobile networks, access networks and also IP networks are integrated.

A Next Generation Network (NGN) can integrate a wide variety of transmission methods and network structures, such as circuit-switched long-distance networks, multiplexed mobile communications technologies and packet-oriented IP networks, into a convergent network architecture. The backbone of a Next Generation Network is an IP network, which is the best way to integrate the telecommunications network, the data network and the TV network. 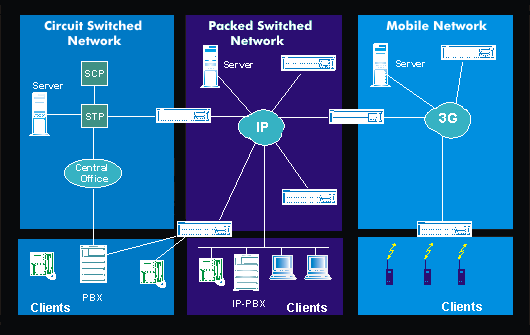 Architecture of an NGN

The International Telecommunication Union( ITU) defines a Next Generation Network as follows: "A Next Generation Network is a packet-based network for providing telecommunications services to users using diverse broadband, QoS-based transport technologies, in which the service-related functions are independent of the underlying transport-related technologies. It provides users with unrestricted access to the networks, service providers and services of their choice. It supports universal mobility by allowing the uniform provision of services to the networker everywhere." The NGN is described in ITU standard Y.2001.

Separation of services and transport

The ITU definition also refers to the separation between service functions and transport functions. The services are provided with appropriate bandwidths and quality of service (QoS). The transport functions support all connection types, the point-to-point connection as well as the multipoint connection. The resulting NGN architecture model consists of the user, the transport layer, the application layer with user profiles and other networks with which the user communicates. 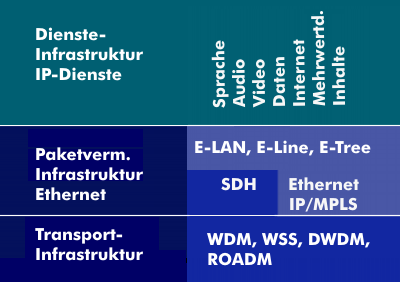 The control of the service and transport functions is handled by subsystems. At the transport level, there is the Network Attachment Subsystem( NASS) and the Resource Admission Control Subsystem( RACS) through which access permissions and IP address assignment are controlled. The user has an intelligent information management system and has the possibility to adapt narrowband and broadband services to his requirements. One aspect of the service offering is convergence of services for telephony, the Internet and television, known as triple-play services.

Since many services are IP-based, NGNs are migrating toward IP networks and all-IP networks, which are characterized by high network intelligence.

More comprehensive service offering than in other networks

The service offering of Next Generation Networks is much more comprehensive than that of conventional Tk networks. A key role is played by the IP Multimedia Subsystem( IMS), whose architecture ofsoftware and network components forms the basis for the new services. The IP Multimedia Subsystem forms the platform for fixed and mobile networks on which the various services and terminal equipment work together. The services include the provision and marketing of online content or interworking services that link different databases, networks, protocols and applications. Other applications include the management and operation of networks and services for customers. Since an NGN has open and standardized interfaces, new functions and services can be implemented and integrated quickly. This can also be done directly by the user without having to know the network architecture.

The Next Generation Networks are to be expanded more intensively in the years from 2010. The background to the expansion of NGN networks is the diminishing returns that remain for operators of transport networks when they make them available in the current situation. In this context, the term commoditization is used to refer to the expansion of the range of services beyond pure transport services to include service and content providers.