Network Attached Storage(NAS) is a counter concept to storage area networks( SAN), which has a broader supply base and builds on existing network structures. The NAS concept is based on centralized data storage and consists of a NAS server that is connected to the corporate LAN and is used exclusively for data storage.

All data traffic runs over the existing corporate network, LAN/WAN, which is thus burdened. In addition to Ethernet, Fast and Gigabit Ethernet, this can also be ATM or Fibre Channel. NAS systems use existing hardware as storage and network components and offer file sharing between different operating systems. For this purpose, Network Attached Storage uses the Network File System( NFS), the Common Internet File System( CIFS) for PC data structures and HTTP. Network Attached Storage can be used to solve storage problems with normal, not oversized network proportions. 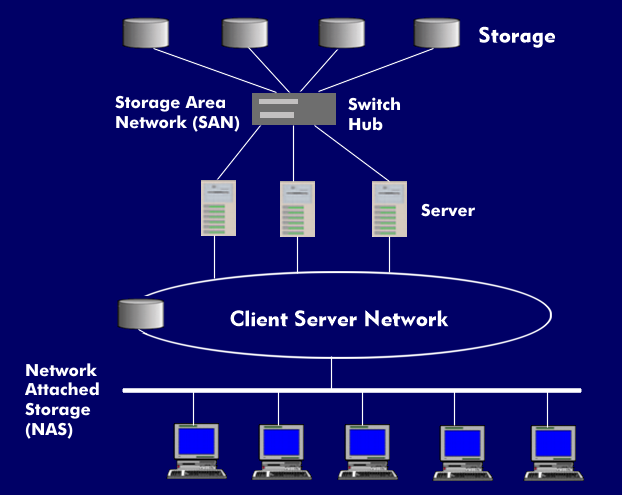 Concept of a SAN with connected NAS

The real-time operating system of the NAS server is optimized for file transfer between the network and the hard disks in the network storage. In addition, the NAS server relieves the application server by taking over the functions of the file server. Network Attached Storage can be used across platforms and can be implemented relatively easily.