Near Field Communication (NFC) is an induction-based wireless technology that operates in the range of 10 cm. It is a further development of RFID with a focus on security.

Components equipped with NFC technology, such as credit cards and wireless devices like smartphones, can communicate with each other. The communication relates to the exchange of information such as telephone numbers or payment transactions, but it can equally be used in merchandise management, for cashless payment, as an admission ticket, ticket or in other areas.

Near field communication can be used, for example, to wirelessly transfer data from a digital camera, PDA, cell phone, smartphone, tablet or set-top box equipped with an NFC chip to a personal computer or other device. Data can be exchanged or information and services accessed merely by holding the devices together. 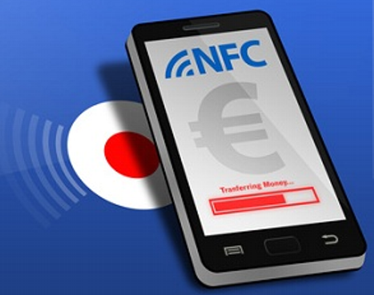 Charging an NFC smartphone with a sum of money, photo: smartphone-top5.de

NFC technology can be used for authorization or access control, for paperless admission tickets, for e-ticketing, in m-payment for contactless payments with NFC credit cards, smartphones or tablets, or for downloading funds from ATMs using smartcards. Standardized by ISO 18092, European Computer Manufacturers Association( ECMA) and European Telecommunications Standards Institute( ETSI), near field communication is compatible with contactless smart card( CICC).

The technology of near field communication

Amplitude shift ke ying( ASK) is used as modulation and the encoding is based on Mifare technology developed by Philips and Sony's FeliCa technology. In active mode, the initiator or the target can transmit. In this case, the electromagnetic field is modulated according to the data signals. The data rate of NFC technology is up to 424 kbit/s and can be set in steps of 106 kbit/s, 212 kbit/s and 424 kbit/s.

Standardization of near field communication

The standardization of near field communication is being driven by the NFC Forum, which has developed a corresponding NFC architecture involving NFC tags. In addition, the Bluetooth Special Interest Group( BSIG) has also taken up the topic. Various smartphone operating systems such as Android, MeeGo and Symbian support NFC technology. This fact plays an important role in the acceptance of NFC technology because cell phones or smartphones equipped with NFC technology can be used as mobile card readers for contactless smart cards. And this refers not only to monetary transactions, but also to other applications such as the electronic ID card(ePA) or the electronic health card(eGK).