Crosstalk is a mutual interference of signals transmitted in closely adjacent cores. A distinction is made between near-end crosstalk and far-end crosstalk. Near-end crosstalk (NEXT), also known as cross- attenuation, is a measure of the suppression of crosstalk between two adjacent pairs of wires at the beginning of a cable.

Since the transmit signal is often transmitted in one pair of wires and the receive signal in another, crosstalk between the two pairs of wires can cause interference in the receive channel. The crosstalk is due to electromagnetic fields generated by the signal transmissionand induced in the other pair of wires. The near-end crosstalk indicates how strongly the signal of one wire pair is induced into the other wire pair. It is specified as the logarithmized ratio of the signal power in the transmitting wire pair to the received power in the receiving wire pair in decibels( dB).

Relationship between attenuation, NEXT and FEXT

The near-end crosstalk is relatively independent of length, but strongly dependent on frequency. It decreases by about 15 dB/ decade. The NEXT values of data cables can be improved by design measures such as different lay lengths or additional shielding of the wire pairs. The measurement of the near-end crosstalk must be performed from both cable ends, since the attenuation and the crosstalk of the cables can be very different, which means that the NEXT value can also differ greatly. 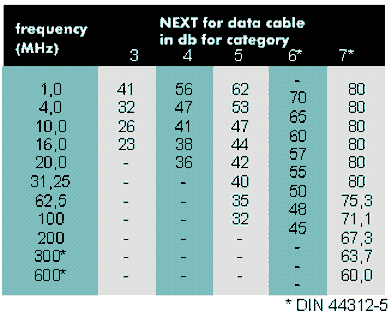 NEXT values in dB for data cables