Musical Instrument Digital Interface (MIDI) is an interface standard developed in 1984 for the connection and control of digitally controllable musical instruments and the storage of playing instructions. The International MIDI Association( IMA) is responsible for the further development of the MIDI interface.

Via MIDI, instructions are given as to which sound is to be produced at which time by which instrument. The control instructions are numeric values and special MIDI numbers contained in the standard MIDI file format( SMF). 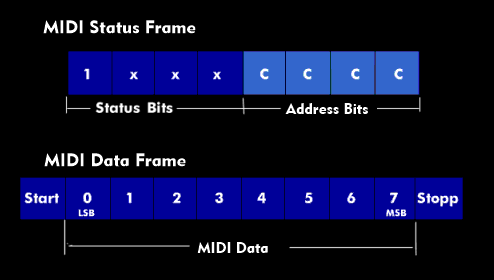 The MIDI interface is a serial interface that can be used to control sound modules, keyboards, synthesizers, or drum modules from a personal computer using the SMF file format, which evolved from the original MIDI format. The MIDI interface operates at a data transfer rate of31.250 kbit/s and has an optocoupler to suppress hum loops.

Transmission via the MIDI interface

Bit sequence and actions of the MIDI command bits

MIDI data is transmitted using a transmission protocol consisting of a status frame and one or more data frames. The status frame includes four status bits for mode and control and another four bits for channel addressing. The MIDI data stream is transmitted in 8-bit or 10-bit words. The data frame starts with a start bit, followed by the data bits beginning with the least significant bits( LSB). The eight data bits are followed by a stop bit. Start and stop bit are used for synchronization. As time code the MIDI interface uses the MIDI Time Code( MTC).

The structure of the MIDI channel

A MIDI channel consists of 16 logical channels which are addressed by the 4 bits in the status frame. Via these channels the data is transmitted to the individual devices.

Pin assignment of the DIN connector for MIDI

The physical connection can only be made between devices that have a MIDI interface. The connection is made via a MIDI cable, which connects the MIDI connectors MIDI- In and MIDI-Out. The MIDI connector used is the well-known diode connector, which is described as a five- pin DIN connector in DIN 41542. There are special wavetable extension cards for personal computers( PC) in which sound patterns are stored. The file extension for MIDI files is *.mid.