Multifeed technology is a satellite reception technique in which one parabolic antenna can receive several satellites that have different, slightly different orbits. Technically, this could also be achieved by rotating the parabolic reflector.

Multifeed technology has a separate LNB converter for each targeted satellite, which are offset from each other by a few degrees. In addition, if the antenna dish is aimed exactly at one satellite, the other satellites will be slightly out of focus and received with some defocusing. This technique finds its limits when the satellites to be received are more than 12° apart. 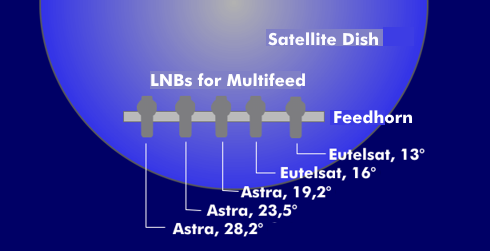 Arrangement of several LNBs with multifeed

With the multifeed technique, for example, the various Astra satellites and those of Eutelsat could be received simultaneously. Since the satellite dish is focused on one of the satellites, the reception field strength is lower for the other satellites because they receive an oblique satellite signal.