Multi-Protocol Label Switching (MPLS) is a technology whose concept is based on the transmission of IP data via ATM. MPLS can be used to bypass complex meshed virtual circuits( VC) for individual virtual private networks( VPN) and to build thousands of VPNs on existing technology.

MPLS technology is used to increase the performance of wide- area networks and is expected to help handle rapidly growing IP traffic. It also provides quality of service in IP networks and facilitates the transport of real-time data over packet-based networks.

MPLS switching is standardized by the Internet Engineering Task Force( IETF) and provides simplified management and improved organization of traffic in Internetworking systems and VPNs, as well as support for scalable and manageable QoS applications. With MPLS, a differentiated quality of service can be assigned to each application.

The technical basis of MPLS switching is a label-based forwarding mechanism. According to the procedure, the IP packets are provided with labels according to their priority and transmitted via a label switched path( LSP). For example, MPLS assigns connections with the required bandwidth to the data packets and gives them priority over less important data. 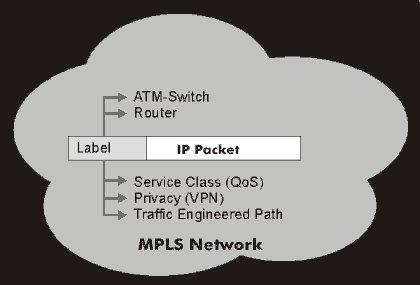 The components of the MPLS network 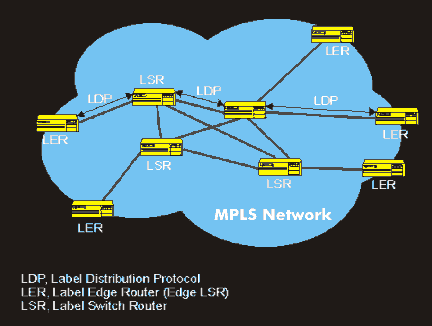 Structure of an MPLS network

The central components of an MPLS network are the Label SwitchRouters( LSR). They divide the IP datagrams to be transported into Forwarding Equivalence Classes( FEC), based on the Layer 3 destination addresses and other characteristics (labels). Based on the labels, the downstream routers forward the incoming data packets. This process is called label switching. 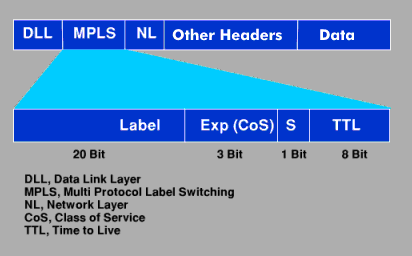 The MPLS header consists of the 20-bit Label Value data field, which forms the basis for forwarding data packets through the MPLS network. This value serves as an index in the forwarding table. This data field is followed by the 3-bit Exp data field, which stands for Experimental Bits, and which normally supports DiffServ. The following 1-bit S data field (stack bit) indicates that the bottom of the stack has been reached. And the 8-bit Time-to-Live field protects the MPLS network against looping. It is decremented on every hop.

The complete MPLS architecture is described in RFCs 3031 and 3032.