Modacom, Mobile Datacommunication, is a cellular network for mobile data communications based on packet switching. The Modacom network is designed for secure data transmission of small to medium data volumes. The network has been in regular operation in Germany since 1993 and is operated by DeTeMobil. It is used for data communications, does not support voice communications and can serve up to 500,000 mobile terminals.

In a Modacom network, the entire radio coverage area is divided into several radio cells with individual base stations( BS). The radius of a radio cell is between 3 km and 8 km. In rural areas, the radio cells can cover areas of up to 25 km. The radio cells are managed by area communication controllers( ACC), also known as radio network controllers( RNC). The controllers are controlled from the network management center( NMC). Access to other networks is provided through the Radio Network Controller.

The frequency ranges of Modacom 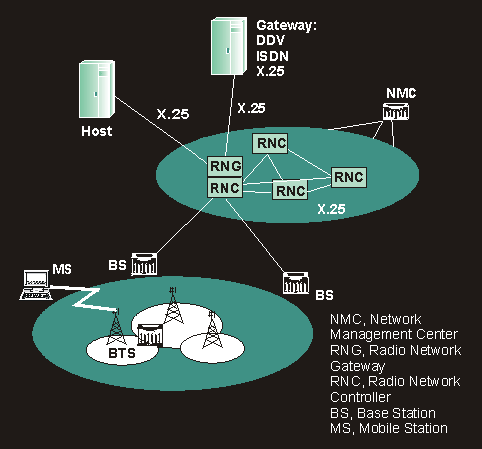 Architecture of the Modacom network

Modacom operates in the frequency ranges from 417 MHz to 427 MHz, with mobile terminals constantly connected to the respective radio stations via radio links. Transmission is digital and takes place via a transparent full- duplex signal channel at a speed of 9.6 kbps. To avoid transmission errors, Modacom uses an error-correcting backup protocol on the network side, the Radio Data Link Access Protocol( RD-LAP).

Both point-to-point and point-to-multipoint connections can be established. In addition, Modacom offers dialed and fixed virtual circuit( SVC, PVC).

Modacom's packet-based switching has significant advantages for data communications over the circuit-switched GSM and Digital Cellular System( DCS) networks. Data communications services supported include file transfer, remote access, telnet, and messaging, server, and e-mail services. Gateways form the transition to other protocol worlds such as ISDN or TCP/ IP. The service has secure data transmission and is particularly suitable for dispatching applications, database access, service and maintenance tasks, and telemetry.

The differences between Modacom and the former data radioMobitex lie in the distribution and the possible applications. Mobitex, which has been discontinued in Germany, is more or less a standard with worldwide distribution under the manufacturer's name DataTAC; in contrast, Modacom is only used nationally. Mobitex has international roaming; Modacom has national roaming. Mobitex is also intended for mobile indoor use; Modacom, on the other hand, is only for outdoor use.