Micro Energy Harvesting (MEH) stands for small energy harvesting. This refers to energy harvesting from ambient energy sources. This can be the slightest air currents, a change in ambient temperature, a vibration or a keystroke.

Micro-harvesting refers to minute natural energy sources whose energy is accumulated and stored. The stored energy can then be retrieved in the form needed for the particular supply. 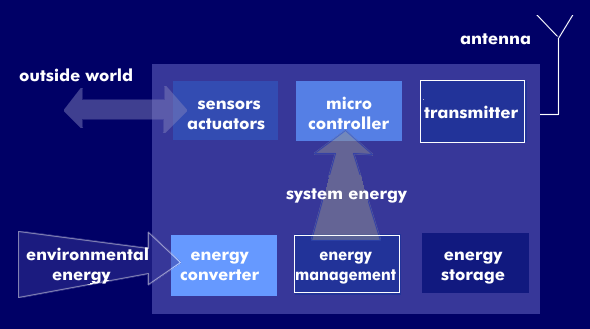 Although energy harvesting is gaining importance in the context of energy conservation, the technology of micro energy harvesting has been known for several decades. Just think of the first pocket calculators equipped with small photocells or wristwatches in which kinetic energy from arm movement is used. Micro energy harvesting uses transducers that work according to known effects such as the piezo effect, Hall effect, Seebeck effect or the Peltier effect. They can be thermal generators( TEG) or piezoelectric generators( PEG), special antennas, CCD sensors, heat pipes, solar cells or self- resonance generators that convert temperature differences, air currents, light differences, magnetic field changes, electromagnetic radiation or mechanical forces and vibrations into electrical energy.

These micro- power plants generate tiny electrical outputs, in the micro- and milliwatt range. The small energy harvesting components are designed to operate autonomously and can be used instead of batteries or accumulators. This also means that these components may be energy-autonomous and used in battery-less wireless technology.

Areas of application for energy harvesting are energy-autonomous wireless sensors, such as those used in ZigBee, EnOcean, WirelessHART or other sensor networks. This also has the advantage that the wireless sensors are not dependent on batteries and their lifetime and do not require maintenance. Current developments in energy harvesting components are aimed at autonomous miniature components, Micro Energy Havestern, which can be used everywhere in an energy-autonomous manner. The areas of application range from medical technology with patient monitoring, automotive technology and automation technology to logistics, weather research, agriculture and forestry, and building automation in smart homes.

Design of an energy harvesting system with sensor network

A complete energy harvesting system with wireless sensor network(WSN), which harvests energy, converts, stores and uses it, and acquires measured values and transmits them via a wireless sensor network, consists of the energy source - which is the energy harvester -, the management unit for energy management, the sensor with AD converter and control unit, and the transmitting device and receiving device for radio transmission.