Medium wave is a broadcasting technical designation for a frequency range in which mainly amplitude modulated broadcasting with double sideband modulation and full carrier signal is transmitted.

The modulation code used is predominantly A3E. The frequency range for medium wave is in the MF band, and extends from 525 kHz to 1.605 MHz. It consists of 121 channels with a channel width of 9 kHz. The medium wave radio waves propagate as ground and space waves. The reception of the ground wave is relatively limited due to attenuation effects. The situation is different with the space wave, which is reflected in the stratosphere and can achieve large ranges even at low frequencies. 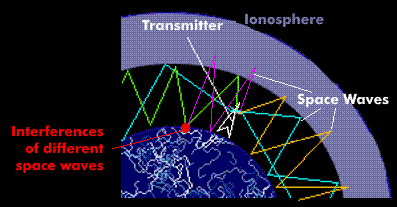 Interference caused by the collision of multiple space waves