Masking is an effect of psychoacoustics used in audio compressions such as in MPEG, MP3 and ATRAC to reduce storage requirements. Masking is two distinct phenomena, one that is volume and frequency dependent and a second that is time dependent and occurs temporally. The term masking is also used as data masking in the context of data protection and data leakage detection.

The loudness- and frequency-dependent effect of masking states that one can no longer subjectively perceive sounds when louder sounds or noise mask quieter sounds. Since the human ear cannot resolve two tones with adjacent frequencies, the quieter tone is masked by the louder tone. 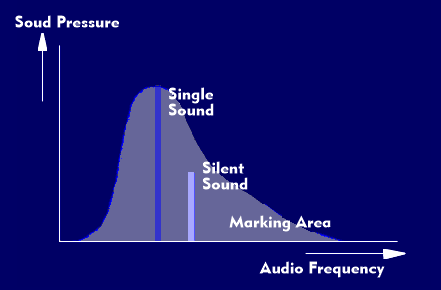 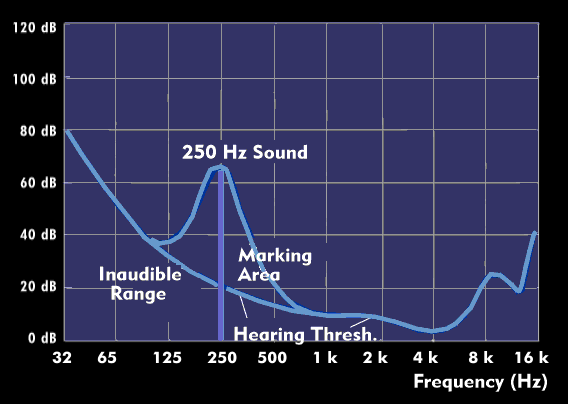 At sufficient volume, the human ear can no longer perceive sounds that differ greatly in frequency. However, the masking effect decreases sharply with greater frequency difference between the tones. This effect, in which the hearing threshold is shifted toward higher levels, is called spectral masking. 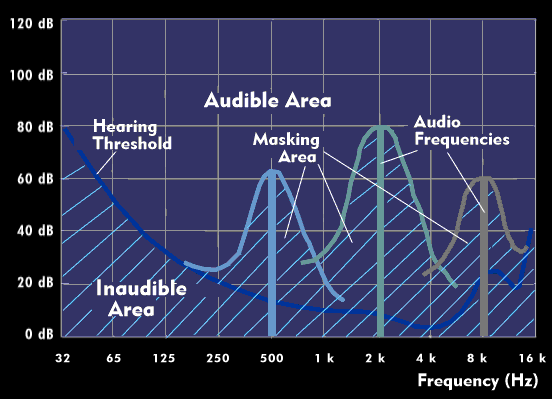 The second effect, temporal masking, reflects the inertia of the human ear. The auditory system adjusts to loud and soft audio sounds and requires a certain recovery time after a transition from loud audio to soft audio - and vice versa. This phenomenon is particularly glaring in the case of a loud bang after or during soft music. This temporal masking obscures soft sounds for a certain time before and after a loud sound. The hearing characteristics change their behavior, the hearing threshold decreases in a few milliseconds and the normal hearing behavior is reached again only after 200 ms. This temporal masking is used in audio compression to reduce the amount of data.