In terms of structure, an MRAM memory cell consists of two thin magnetic layers separated by an intermediate layer. One of the two layers can be magnetized by low currents, the other cannot. Because only one layer can be magnetized, its magnetic polarization can change relative to the other. As the magnetic polarization changes, so does the electrical resistance of the memory cell. This change in resistance is converted into digital information. 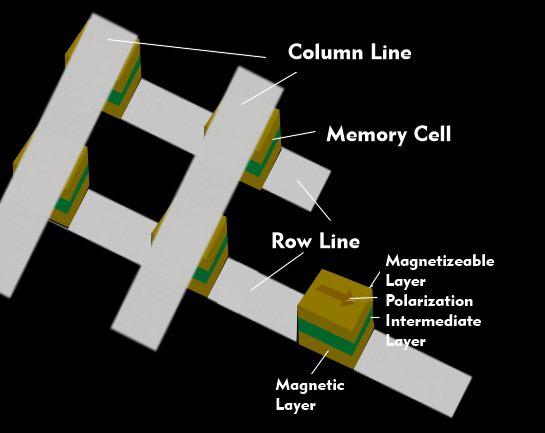 Structure of the MRAM memory cell

Each MRAM memory cell is connected in the form of a matrix in columns and rows with two bit lines, which are used to store and read out the information.

MRAMs are characterized by extremely low power consumption. For example, a 256-K memory requires only about 20 mW. This RAM technology can be used for low-power applications in military and satellite technology as well as in mobile devices.

The first 256-Kbit RAM was organized in 16 banks of 16 Kbit each. The read/write cycle is extremely short, less than 20 ns.