A low-noise block converter (LNB) is a low-noise converter that frequency converts the received antenna signals from parabolic antennas focused in the feedhorn. Since satellite services are transmitted in the microwave range between 10.7 GHz and 12.75 GHz, LNB converters must be tuned to this frequency band and convert the microwaves to lower frequencies so that they can be transmitted over high-frequency cables and received in the receiver.

LNBs amplify the received microwaves with high frequency transistors, High Electron Mobility Transistor( HEMT), and select the waves polarized in vertical and horizontal planes with a polarization switch. The gains achieved are in the range of 50 dB to 60 dB. The amplified and selected microwaves are fed to separate mixers and mixed with the local oscillator frequency( LOF). The lower sideband is filtered out as an intermediate frequency(IF), the IF band. The IF frequencies are in the F-band between 950 MHz and 2.150 GHz. These frequencies are available at the output of the LNB and are fed via an antenna cable to the receiver, which selects the individual satellite channels from them. The signal transmitted from the LNB to the receiver is referred to as the IF signal or satellite signal. 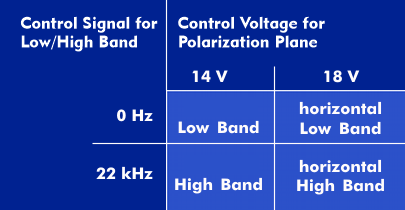 The LNB is designed as a single-band LNB for one frequency band, but it can also receive several frequency bands in vertical and horizontal polarization planes. These LNBs are suitable for community antenna systems. The switching of the received polarization plane is done with coaxial relays by means of two DC voltages of 14/18 volts, the switching between the low-band for analog TV and high-band for digital TV with the 22 kHz control signal.

The simultaneous reception of several satellites 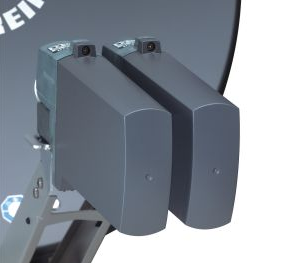 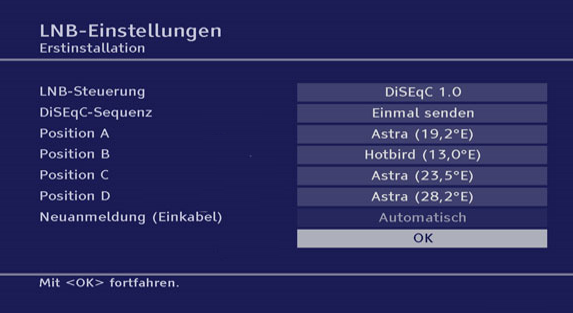 LNBs are available in a simple universal version as a singleLNB, in a universal double version as a dual LNB, dual band L NB or twin L NB and in a quadruple version as a quad LNB and also as a quattro LNB, whereby the universal refers to the reception of the entire frequency band and thus for analog TV and digital TV.