Positioning is the determination of the geographical location of objects and persons. It can be carried out by means of satellite navigation, via existing mobile communications networks, WLANs and also via RFID, whereby the position data determined must be transmitted to the receiver via a return channel, for example via a mobile communications network. Only then is it a localization. If this return channel is missing, it is a position determination.

Positioning can apply equally to persons or to moving and static objects. It can be used in patient monitoring to locate mentally disturbed persons or in geofencing in open prisons. Likewise, it can be used to locate ships and vehicles, to determine the position of containers in a container port, or to locate equipment within a company. Since positioning is used for both static and moving objects, the transition to tracking is fluid. 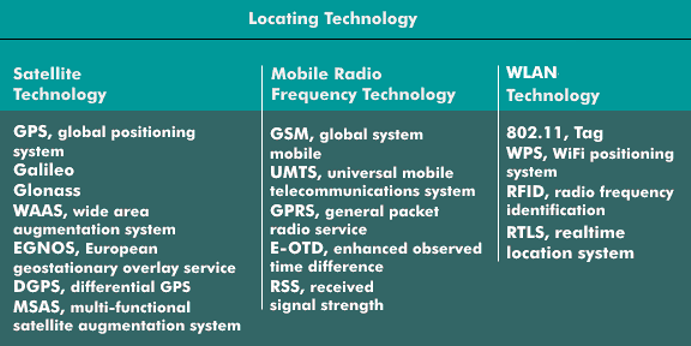 In mobile radio-based systems, the position is determined in the simplest case by identifying the radio cell; other methods work with field strength or time-of-flight measurements and subsequent angle determination from several base stations. Frequently, even the two methods of field strength and time-of-flight measurement are combined. However, the mobile radio-based positioning accuracy is much lower than that of satellite navigation. The purpose of mobile radio positioning is to provide location-based services( LBS) to the user, and to locate the sick person in case of an emergency call. Fleet management systems( FMS) of truck fleets are another application area.

Cellular network-dependent location techniques determine the radio cell in which the user is located from location and visitor directory information. Known as Cell Identity( Cell-ID) or Cell of Origin( COO), this technique is relatively inaccurate and dependent on radio cell size. Location accuracy can be improved by using an additional field strength measurement, Received Signal Strength( RSS). The positioning accuracies that can be achieved with this method are approximately between 200 m and 10 km, depending on the radio cell size. 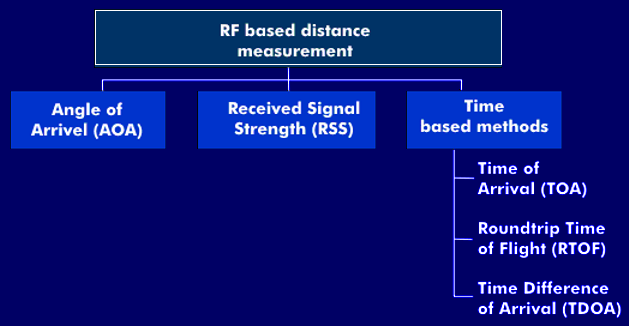 The positioning concept supported by the Federal Communications Commission( FCC) requires that network-based positioning be performed within defined error limits so that it can also be used for emergency calls. To this end, for positioning, the propagation time between the signals from at least three neighboring base stations in the cell phone is recorded and sent to the base station. There are several methods that work on this basis: Time of Arrival( ToA), Time Difference of Arrival( TDoA), Angle of Arrival( AoA) and Angle of Departure( AoD) are among them. Enhanced Observed Time Difference ( E-OTD) is used in GSM networks in conjunction with General Packet Radio Service ( GPRS) to improve position accuracy. InUMTS, the corresponding method is called Observed Time Difference of Arrival (OTDOA). It offers an improvement in position accuracy to 30 m to 50 m, which is also due to the fact that UMTS has smaller radio cells.

WLAN-based positioning, WLAN Positioning System( WPS), is a technology that works inside buildings. In principle, it involves measuring the distance from the terminal device to several access points( AP) using a triangular method between three access points and the terminal device. This measurement assumes that the positions of the access points are known. Outside buildings, WPS systems achieve location accuracies of between 10 m and 20 m; inside, the location accuracy is about 3 m.