The LIN bus is a low-cost, flexible sensor- actuator network that links sensors and actuators and their control units at the field level inautomotive technology and is connected as a sub-bus to a more powerful field bus, such as the CAN bus.

The LIN bus is a one- wire bus, it replaces the complex wiring of sensors and actuators with a CAN control unit. This allows the I/O functionality of the CAN controller to be distributed to the LIN slaves. It meets the specifications of SAE class "A". The LIN protocol was first introduced at an American congress in 2000.

Like most fieldbuses, the LIN bus operates in master- slave mode and transmits data via a single-core cable to which all LIN components - LIN master and LIN slaves - are connected. The cable length, the capacity of the cable and the transmission level are defined. 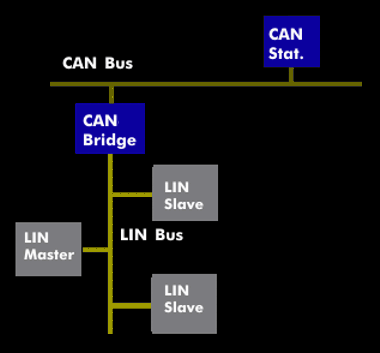 LIN bus as sub-bus of the CAN bus

Like the CAN protocol, the LIN bus works with a special message identifier. This identifier field contains the most important information of the ECUs and also takes the place of the source and destination addresses, which do not exist in the LIN data frame any more than they do in the CAN data frame, for example. Communication is multicast or broadcast, with each LIN ECU receiving the information via the LIN Description File( LDF). The data rates of the LIN bus are very moderate and are 9.6 kbit/s and 19.2 kbit/s, and 10.4 kbit/s; the signal level on the single wire bus is 12 V. A typical LIN bus has 16 LIN stations, with the LIN masters controlling the LIN bus and communicating with the LIN slaves. The LIN slaves are microcontrollers for controlling sensors and actuators, such as a window regulator or wiper motor.

In order to be able to implement the LIN bus as inexpensively as possible, the slaves have been equipped without extensive functional devices and synchronized via the bus.