The 802.1AB standard provides a reliable method for accurately determining the network topology of local networks. Knowledge of the topology with the physical connections between the network components provides the prerequisite for the management of local networks. In addition, the Label Distribution Protocol( LDP) supports Power over Ethernet( PoE+) in that switches transmit the available PoE+ power to the Powered Devices( PD) more efficiently.

The basis of the 802.1 standard is a Management Information Base( MIB) proposed by the Internet Engineering Task Force ( IETF), the "pTopo MIB", which can be used to manage topology information on agents. Since the IETF has not developed an associated protocol, IEEE has taken up this topic and developed a corresponding discovery protocol with the Link Layer Discovery Protocol (LLDP). This is a further development of the CDP protocol from Cisco, but it is not compatible with it. 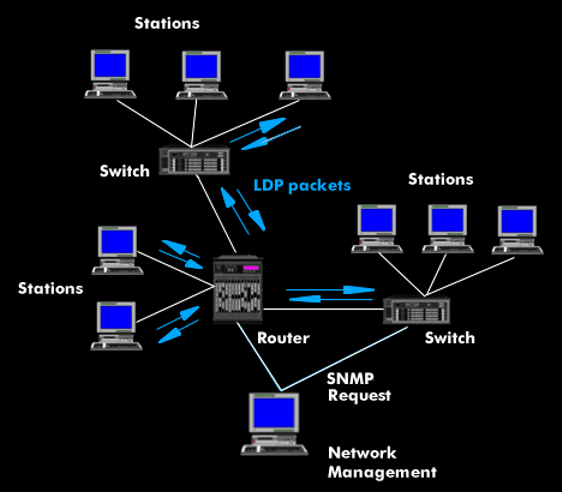 How the LLDP protocol works

The LLDP protocol works with its own Management Information Base (MIB), in which the data about the local agent and the discovered neighbor agents are stored and used for the configuration of the LLDP protocol. For this purpose, LLDP sends data packets, called LLDP-DUs (Data Units), to all physical interfaces of a device. Each connection point within a topology is unique and is uniquely identified as a Media Service Access Point( MSAP). The network management system can use this unique assignment of MSAPs to determine the network topology. An MSAP point is composed of the device identifier (chassis ID) and a port identifier(port ID) that is unique for this device.

The LLDP protocol is sent at periodic intervals of 30 seconds or at other time intervals. Whereby it is a one-way transmission in multicast and a sent data packet is not acknowledged with a receive packet. Both sending and receiving are done independently of each other.

The LLDP protocol, which resides at the link layer, enables a device on the Local Area Network( LAN) to send information about itself and to store information received from its neighboring devices in the LLDP MIB. This information can be queried by a network management system via the Simple Network Management Protocol( SNMP).