Link classes for applications up to 10 Gigabit Ethernet

Class A: Applications with low data rates and frequencies up to 100 kHz. This class is suitable for X.21/V.11, basicISDN, for example.

Class B: Voice applications with frequencies of up to 1 MHz, e.g., for basic and primary multiplex connection of ISDN.

Class C: Voice and data transmission with frequencies up to 16 MHz. This class can be used for 10Base-T, for Token Ring 4/16 Mbit/s or PBX technology. Link classes "A", "B" and "C" are no longer considered in the newer standards.

Class D: Voice and data transmission with frequencies up to 100 MHz. Used in Fast Ethernet, TPDDI.

Class E: Voice and data transmission and multimedia with frequencies up to 250 MHz, including ATM 155 and 1000Base-T. Class E allows the use of high-quality overall shielded S/ UTP cables or preferably four-pair S/ STP cables. With regard to the connection technology, improved RJ45 plugs and sockets are used.

Class EA: The link class "EA" has a transmission bandwidth of 500 MHz and is suitable for high-speed networks. This link class is used in 10GBase-T, among other applications.

Classes F and FA: Voice, data transmission and multimedia applications with frequencies up to 600 MHz and 1,000 MHz respectively. These link classes, specified according to E-DIN 44312-5, are suitable for use in ATM 155/622, Gigabit Ethernet and 10GBase-T of 10 Gigabit Ethernet. 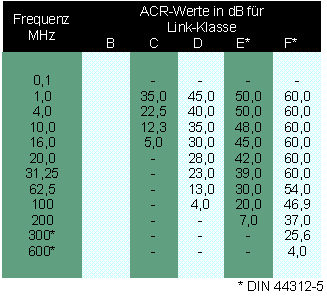 Class "F" requires the use of four-pair single or overall shielded S/STP cables with high bandwidth, excellent near-end c rosstalk( NEXT), good attenuation behavior and impedance characteristics. The RJ-45 connector is of limited use because the limits for near-end crosstalk and attenuation-to-crosstalk ratio( ACR) are met only when the outermost pins are occupied. For classes "E" and "F", the GG45 connector and the ARJ-45 connector have been standardized and the Tera connector has been developed. 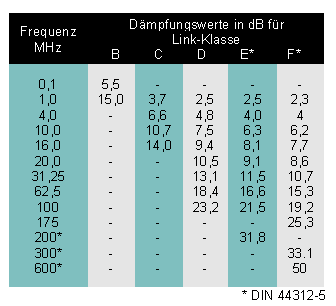 Class FA: This link class is specified for frequencies up to 1 GHz. It requires category 7A data cables and data connectors. Class FA cabling is characterized by significantly improved parameters compared to class "F". For example, the attenuation-to-crosstalk ratio (ACR) at 500 MHz is 28.3 dB better than that of F class. Likewise, the values for extraneous c rosstalk( AXT) and powersum NEXT( PSNEXT) are significantly higher.

The definitions, the designations and the scope of the link classes are different in the American EIA/ TIA standard 568 compared to the international standard ISO/IEC 11801and the German standard DIN 50173.

EIA/TIA uses the term Category for the link class and knows the categories 3, 4 and 5.

While Class C and Class D links are similar to EIA/TIA Category 3 and 5 links, there are some key differences: 11801 explicitly excludes workplace cabling and terminal equipment cabling, such as the connecting cable that connects the personal computer( PC) to the junction box and the patch cord in the distribution area. The EIA/TIA connection takes these cables into account in the specification. This is critical in that the connecting cable is not an integral part of the cabling system and can be replaced at any time with a lower quality cable, which would have a direct impact on the link class. 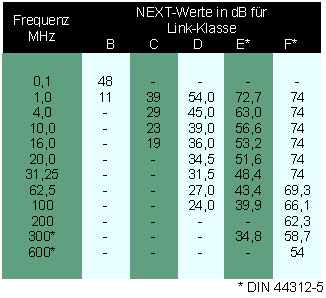 With the introduction of the new link classes "E" and "F", which are based on the new categories 6 and 7, the link definition has also been revised. Instead of the Link cabling route, which comprises two connections and five meters of patch cord in the floor distributor, there is now only the permanent transmission route, i.e. from the patch panel to the telecommunications junction box, for the previous Link classes "D", "E" and "F". In addition, the complete channel between two terminals is specified, taking into account all flexible connecting lines. The channel specification corresponds to the link class already defined in EIA/TIA standard 568A.