Last mile refers to the connection area between the local exchange and the in-house exchange. This area can be bridged by a wide variety of transmission technologies. In automation technology, the "last mile" is the area between the control units and the subordinate field devices.

The best-known last-mile connection in communications technology is that via the long-distance telephone network, which is subject to the scope of Telekom. This connection can be used via xDSL techniques for high-speed connections. There is also a proposed solution from the IEEE802.3ahworking group, with Ethernet in the access area. 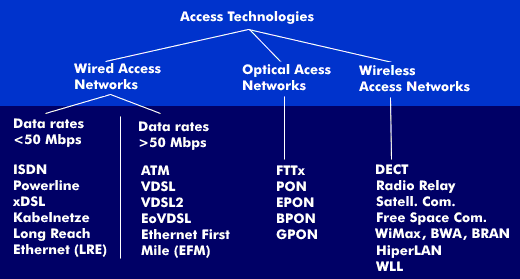 In addition, there are various other solution approaches such as interconnection lines based on copper or fiber optics, unbundled subscriber network access, leasing of lines from the telecom or city network operators, directional radio as a point-to-point connection, the Broadband Radio Access Network( BRAN), WiBro or WiMAX with its high transmission rates, the use of mobile communications networks with high data rates such as UMTS or Long Term Evolution( LTE), the use of existing broadband cable networks(BK networks), also known as cable distribution networks, connection via optical access networks (OAAN) with FTTx technology or with Powerline( PLC) via the low-voltage network. The latter two techniques are proving to be problematic, prone to interference and inefficient, as in the case of transmission over the power grid, or very costly, as in the case of the broadband network.

Widely used techniques for bridging the last mile are the various DSL methods over existing telephone cables. These techniques are extremely sophisticated and efficient thanks to line bonding, vectoring and phantom operation. In addition, optical connection technologies, in which the optical fiber can be laid all the way to the end device, are playing an increasing role.