Most laser diodes are edge-emittinglasers, orEELs, which use stimulated emission to generate light. They modulate the light signal in the intensity and form of amplitude modulation, frequency modulation or phase modulation, with which transmission frequencies of about 10 GHz are achieved. 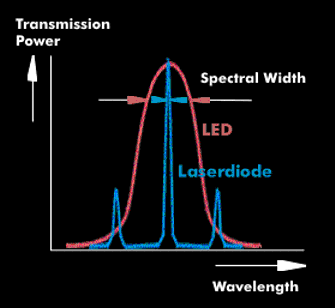 The spectral width with which laser diodes emit their strongly focused light is only 1 nm; in the case of the distributed feedback laser( DFB), it is even only 0.1 nm. In the case of laser diodes used in optical transmission technology, the radiation area has a diameter of only 5 µm. This small emission area and the enormously strong beam focusing are ideal prerequisites for use in single mode fibers. VCSEL lasers are used for the optical window at 850 nm, and Fabry Perot lasers( FPL) are used at 1,300 nm.

The modulation frequencies can be 10 GHz, the rise time is 10 ps, and the lifetime of 10,000 hours is much lower than that of LEDs. Disadvantages are the higher circuit complexity compared to LEDs as well as the temperature dependence and the sensitivity to backscattering.