The word joystick was originally used for the control stick of an airplane. Externally, a joystick is comparable to the gearshift lever of a car and, like it, can be moved in all directions. In computer technology, the joystick is used to control the cursor on the screen.

In dynamic function input, switch contacts in the joystick are actuated in the four axes and their contact formation is evaluated by the computer. Instead of the microswitches, the movement changes can also be converted into corresponding direction changes by rotary resistors. When the joystick is released, the cursor remains in the previously reached position. In addition, a joystick has pressure contacts and switches. 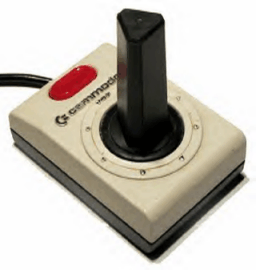 Joysticks are used as control levers mainly in video games and in the radio control of drones. They are used to change the direction of virtual persons or flying objects, to change the speed of virtual cars and to trigger various functions via the buttons integrated in the joystick.