The ionosphere plays an important role in the wave propagation of radio waves. It is a region of ions located between the stratosphere and the exosphere at an altitude of about 50 km to 400 km above the Earth's surface.

The ionosphere is not homogeneous and can transmit, diffract, reflect, absorb or scatter radio waves depending on their frequencies. As solar radiation increases, it absorbs radio waves more strongly. This means that the absorption is stronger during the day than at night. Space waves are reflected at the ionosphere.

The ionosphere is divided into several altitude regions, which are marked with letters. The lowest region between about 50 km and 100 km is the D-region, above that up to about 150 km is the E-region. In the E-region sporadic strongly ionizing regions occur in the summer months, where short waves but also ultra-short waves are reflected. These regions are called Sporadic-E (Es). 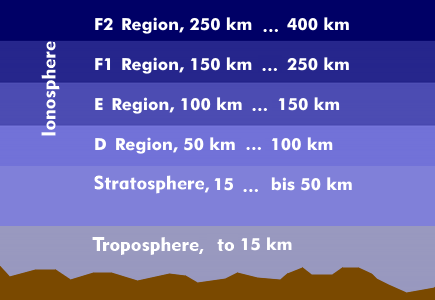 Structure of the Earth's Atmosphere

Above the E region are two F regions: F1 is between 150 km and 250 km and F2 above that up to 400 km. The F region has a higher density of free electrons caused by increased ionization from solar radiation. The F region reflects frequencies up to about 10 MHz and partially absorbs higher frequencies. The F1 region is only present during the day and cannot always be observed. It has an electron density of about `5*10^5` free electrons per cubic centimeter, which can increase by a power of ten during strong solar radiation and decrease by a power of ten at night.

Dei F2 region is the actual reflection layer, it reflects RF frequencies equally during the day and at night. It has about `10^6` free electrons per cubic centimeter. Large fluctuations can occur in the F2 region, mainly caused by magnetic storms.