ISMbands, ISM stands for Industrial, Scientific, and Medical, are license-free frequency bands for industrial, scientific, and medical applications. The ISM frequency bands are used worldwide, but they differ slightly in the various continents and countries. Only the transmission power and the interference for neighboring frequency ranges are uniformly regulated. 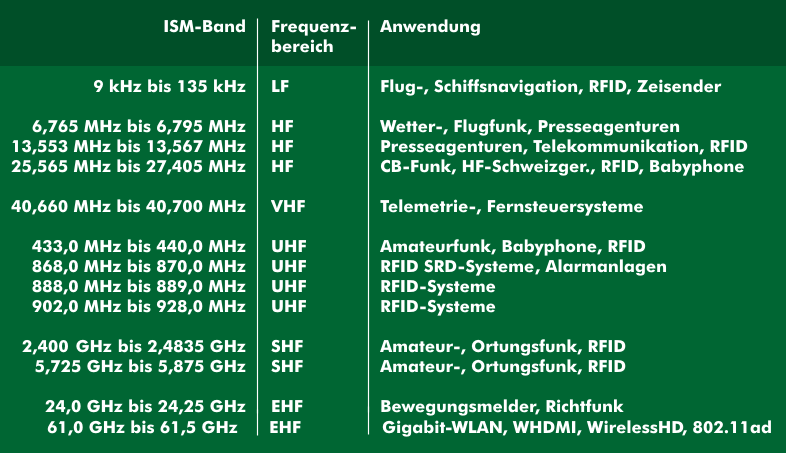 ISM bands and their use

At the lower end of the VHF band, the frequency range at 40.680 MHz is designated as the ISM band. This frequency range deals with radio frequencies for telemetry and remote control systems. This is followed by the various ISM bands in the UHF range between 433.05 MHz and 434.79 MHz, at 868 MHz (in Europe) and 915 MHz (in the USA). 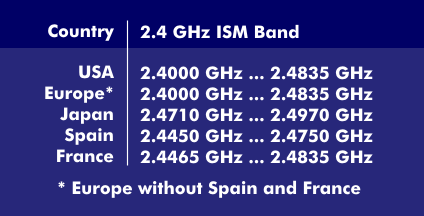 Use of the 2.4 GHz ISM band in the various countries

In the microwave range, the ISM band used for many applications is at 2.45 GHz. For example, the 2.45 GHz band is used by microwave ovens, telemetry transmitters, radio technologies, motion detectors, WLANs, Bluetooth, ZigBee, HiperLAN, WirelessUSB, HomeRF and directional radio, among others. The regulations for the 2.4 GHz frequency band are described in EN 300328. Other license-free microwave bands are between 5.150 GHz and 5.350 GHz and, as an ISM band, between 5.470 GHz and 5.725 GHz. The regulations for this frequency band are described in EN 301893. In the EHF band, the frequency ranges between 24.0 GHz and 24.25 GHz and in the 60 GHz band between 61.0 GHz and 61.5 GHz are available as an ISM band.