Indium phosphide (InP) is a III-V compound semiconductor consisting of indium( In) and phosphorus (P) that emits light when electrically stimulated. It can be used in microwave applications at frequencies from 30 GHz to over 100 GHz and has comparable properties to gallium arsenide( GaAs) and gallium nitride( GaN), but is suitable for much higher frequencies.

Since the manufacturing process of indium phosphide semiconductors is more cost-intensive than that of GaN and GaAs semiconductors, the compound semiconductor is mainly used where special properties offer corresponding advantages. For example, in Gunn diodes at the highest frequencies, in optoelectronics, in QLED displays and in lasers in optical networks. Light emission is at wavelengths around 1,300 nm and at 1,550 nm. Indium phosphide has a band gap of 1.3 electron volts( eV) at room temperature. 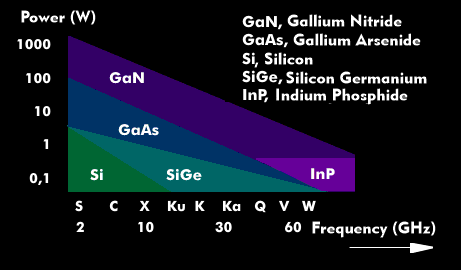 In hybrid silicon lasers, such as those used in silicon photonics, the emitted light is amplified by the InP-based material. The wavelength of the light emission is determined by the spacings in a diffraction grating etched into the silicon.