In general, hysteresis is a state of persistence whose effect persists even after the energy supply has ceased. Hysteresis occurs in many technical disciplines, such as magnetism, control engineering, electronic circuits, logics, sensors or the persistence of liquid crystals.

In the context of ITWissen.info, the term hysteresis refers to the persistence of electrical or magnetic states in materials or circuits. The Duden writes about it: Hysteresis is the lagging behind of an effect behind the variable force causing it. This means, for example, that when a circuit state of a logic circuit changes, a certain change remains behind. In terms of magnetic hysteresis, this means that some of the magnetization remains in the magnetic material.

The hysteresis of ferromagnetic material 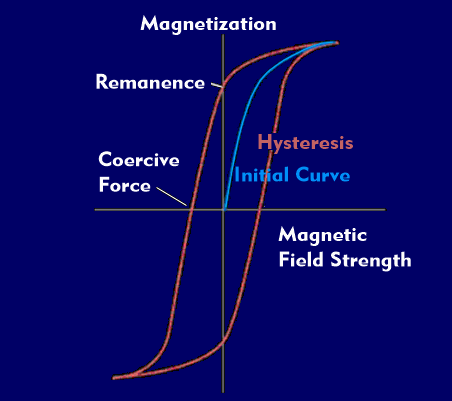 Hysteresis curve with new curve of a ferromagnetic material

The magnetic hysteresis is exemplified in ferromagnetic material. During magnetization, the elementary magnets are aligned by the application of a magnetic field. The magnetization state of magnetic materials depends on the strength of the applied magnetic field. This dependence is nonlinear and reaches saturation at a certain magnetic field strength. This is referred to as the magnetization curve or the hysteresis curve, which represents the relationship between flux density and field strength. The first alignment of the magnetic particles differs from the others in that the aligned magnetic particles retain a residual magnetism, the remanence. This is why the initial magnetization is referred to as the remanence. The remanence can be compensated only by a counter field of the magnitude of the coercive force.

The phenomenon of hysteresis was recognized by Sir James Alfred Ewing in 1890.