Hybrid Broadcast Broadband TV (HbbTV) is a pan-European initiative to harmonize the content and entertainment programs transmitted via television and the Internet. Functionally, it is a much improved and informative videotext, but based on the websites of the Internet. Since online applications make television more versatile and intelligent, hybrid TV technology is also known as smart TV.

The HbbTV specifications were developed by the leading companies in the TV industry and are intended to enable end users to more effectively manage and use the rapidly growing content offered via various transmission channels. HbbTV is based on existing television standards and web technologies from the Open IPTV Forum( OIPF), Consumer Electronics Association( CEA), DigitalVideo Broadcast( DVB) and W3C.

Simple constellation of an HbbTV device

Hybrid TV supports end users who can combine entertainment programs and content from TV and the Internet and view them on the TV set. For this additional information, entertainment companies, television broadcasters and online operators offer other services such as video-on-demand, interactive programs, televoting, video games, teleshopping, electronic program guides, websites or the media offering of the online media library. Hybrid TV uses the Consumer Electronics HypertextMarkup Language( CE-HTML), a variant of the Hypertext Markup Language (HTML) supplemented by elements of consumer electronics, as its description language. 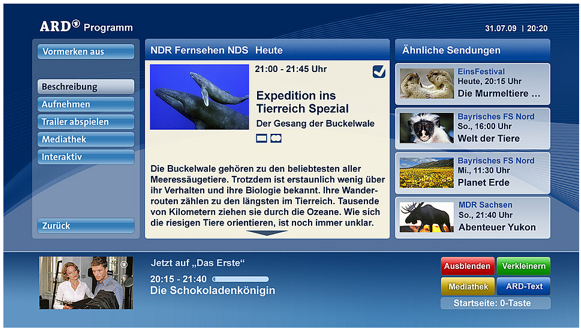 Hybrid TV can link television and Internet content and display it on the same television set. It also supports end- user interactivity, allowing viewers to call up additional information or ordering information from the Internet during a TV program at the touch of a button on the remote control. For this technology, signaling information is added to the TV picture, so-called AIT tables, which contain the Internet address for the additional information, and whose web pages can be called up via the remote control.

HbbTV is a registered brand or trademark.