Home Radio Frequency (HomeRF) is a working group developing an open industry standard for toll-free, digital wireless communication in home networks, similar to IEEE 802.15, ZigBee and Bluetooth. The goal of the standardization is to enable all devices that are typically found in a home to communicate with each other.

The basis for the development is the technology from the IEEE 802.11 working group, which is particularly suitable for data transmission, and the DECT technology from mobile communications, which was developed specifically for voice transmission. The advantages of both technologies are to be combined and adapted to home applications.

Like the other radio technologies, HomeRF operates in the ISM band at 2.4 GHz. The transmission rate is 10 Mbit/s and is to be increased to 20 Mbit/s later. The objectives of 802.11 and HomeRF differ in terms of the area of use and the associated applications. If 802.11 is aimed at the business sector and data transfer, HomeRF was designed for the private sector with voice and data transfer. 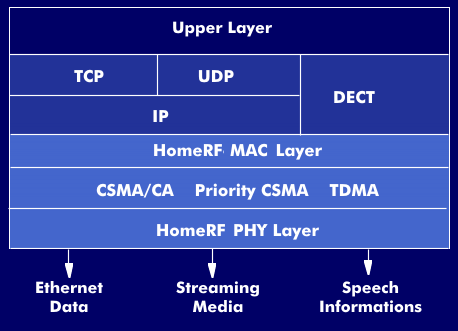 In terms of architecture, HomeRF devices are based around a connection point, similar to a base station. This connection point also forms the gateway to the public network. If the network is used exclusively for data transmission between data terminal devices, then no connection point is required. The devices can communicate with each other directly on a peer-to-peer basis.

HomeRF can support up to four voice terminals - which can be wireless phones or other voice devices - and up to 127 data terminals such as handhelds, personalcomputers, PDAs, control devices, and other digital systems.

As a protocol, the HomeRF standard uses the SWAP protocol, which builds on existing technologies. For voice transmission, the DECT standard is adapted as far as possible, and for data transmission HomeRF relies on 802.11 from IEEE.