Comparison of the digital interfaces DisplayPort, LVDS, DVI and HDMI

HDMI 1.0, introduced in 2002, has a pixel frequency of 165 MHz, and the video resolution is 1080lines with progressive scan, 1,080p, at a refresh rate of 60 Hz. In terms of sound formats, Dolby Digital, Digital Theatre Sound( DTS), MPEG and pulse code modulation( PCM) are supported. Type A is specified as the HDMI connector. The following version HDMI 1.1 differs only slightly from the original version. It also supports DVD-Audio and the HDMI type B connector. The same applies to the HDMI 1.2 version, which additionally supports the Super Audio CD( SACD) audio file format. In the a version HDMI 1.2a remote control functions are supported: the Consumer Electronics Control( CEC) and AV.link. The remote control functions allow multiple HDMI-enabled devices to be controlled with one remote control.

In the HDMI 1.3 version, which was introduced at the end of 2006, the pixel frequency was increased to 340 MHz, which increased the data transfer rate to 10.2 Gbit/s, which is reflected in a line resolution of 1,440 lines. With the high transfer rate, representations in Deep Color with color depths of 24, 30, 36 and even 48 bits can be realized. In addition, lip- synchronization is guaranteed in the 1.3 versions. As color model HDMI uses the YUV color model, for compatibility reasons also the RGB color model and the xvYCC color model, which is characterized by an extended color space. The 1.3 version can transmit displays in Wide QXGA( WQXGA) with 2,560 x 1,600 pixels, making 16:9 displays with 2,560 x 1,440 pixels possible in the home theater. Furthermore, the different 1.3 versions (a/b/c) support Dolby Digital Plus ( DD+), Dolby TrueHD and DTS-HD in addition to the already mentioned audio formats. Type A and type C are mandatory as HDMI connectors.

HDMI 1 4 resp. 1.4a, which was introduced in 2009, supports the format of D-Cinema with 4,096 x 2,160 pixels or the 4K standard with or 3,840 × 2,160 pixels, as well as Adobe color spaces and video games for 3D displays. In addition, HDMI 1.4 offers HDMI Ethernet Channel( HEC), a channel for Internet connection of individual HDMI devices, an audio return channel( ARC) and a connection system for automotive technology, the Automotive Connection System with special cable and HDMI connector type E. This system provides for the distribution of HD video and HD audio within the car.

HDMI 2.0 supports Ultra HDTV in 4K standard with a color subsampling of 4:2:2 with up to 60 frames per second, or a higher color subsampling of 4:4:4 with 30 frames per second. Both variants work with a color resolution of 10 or 12 bits. This results in maximum data rates of 17.28 Gbit/s. Audio is transmitted as 32-channel audio with a sampling rate of 1,536 kHz. In the HDMI 2.1 version, data rates of up to 38.4 Gbit/s are supported. This data rate is suitable for playing back displays in the 8K standard with an image resolution of 7,680 x 4,320 pixels and a refresh rate of 60 Hz.

The layered structure of HDMI 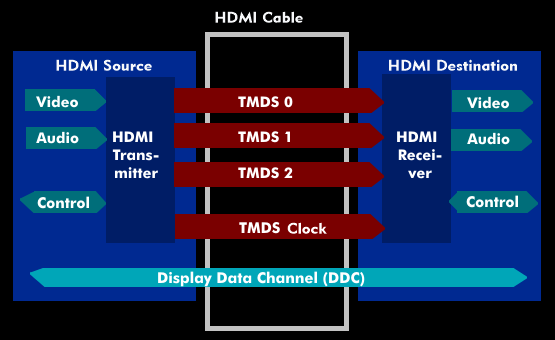 TMDS connections via the HDMI cable

At the physical layer, all HDMI versions use Transition Minimized Differential Signaling( TMDS). In HDMI, there are four twisted pairs of conductors carrying TMDS signals. Video signals in RGB or YCrCb are transmitted over three TMDS lines, and TMDS clock signals are transmitted over the fourth. Digital audio is multiplexed into the video transmission. Transmission is on a special HDMI cable, an S/ STP cable, which features low attenuation up to over 2 GHz. The cable length can be about 7 m with a shielded cable. In terms of HDMI connectors, there are types A, B, C, D and E. Type A is the standard HDMI connector, type B for dual-link, type C is the mini HDMI connector, type D is the micro HDMI connector and type E is the automotive HDMI connector. 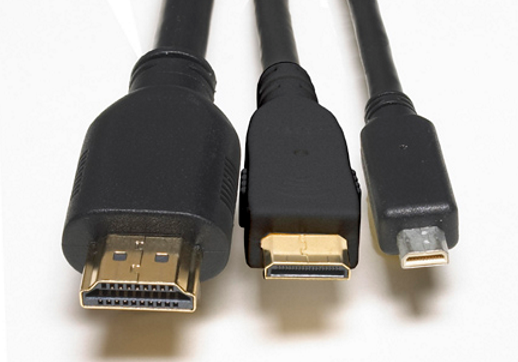 The HDMI interface is of particular importance for consumer electronics, as the remote control protocols AV.link and the CEC protocol can be transmitted via it and distributed to the individual consumer devices connected to the HDMI interface, to radios and TVs, tuners and receivers, recorders and set-top boxes. On the other hand, HDMI can also transmit up to eight discrete audio channels, supporting audio systems in 7.1. This means that digital video and multi-channel audio can be transmitted over a single data cable up to 15 meters long.

In this context, a wireless HDMI solution, Wireless HDMI (WHDMI), is being discussed by the IEEE. With the radio technology located in the 60 GHz band, uncompressed video transmission could be realized wirelessly from the DVD player to the flat screen, for example. In another approach, HDTV signals are transmitted via broadband powerline at 200 Mbit/s over the power grid. Since the data rates are 2.27 Gbit/s or 4.45 Gbit/s depending on the image resolution, the powerline approach uses data compression.

The founding members of the HDMI consortium are Hitachi, Panasonic, Philips, Silicon Image, Sony, Thomson and Toshiba. This composition shows the special importance of HDMI for consumer electronics.