The Hello routing protocol is an Interior Routing Protocol( IRP). It works similarly to the Routing Information Protocol( RIP), but with a different metric: While the RIP protocol uses the number of necessary hops as a metric, the Hello protocol uses the transmission time ( delay) for a connection path.

The Hello protocol's metric gives it a distinct advantage over the RIP protocol: In the RIP protocol, two connection alternatives from "A" to "B" via two intervening routers each are considered to be completely equivalent. In fact, however, they are not, if one connection runs over lines with a 2 Mbit/s data rate, while the other runs over lines with a much higher or lower data rate. The consideration of the transmission time represents an important criterion for path optimization here. 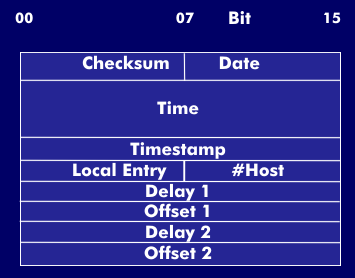 Data frame of the Hello protocol

In other protocols such as the OSPF protocol, the Hello packets are used to confirm the neighborly relationships between routers.