Head-up displays (HUD) technically belong to augmented reality ( AR). This technology dates back to the 1940s and was used in military aircraft. Currently, head-up displays are used in civil aviation and on a test basis in passenger cars.

The difference between head-up displays and head-down displays is that with the head-up display, important driving information such as the current speed, warnings or navigation information is superimposed on the windshield and thus directly in the driver's field of vision. The driver can continue to look at the traffic situation and at the same time see the driving information. With head-down displays, on the other hand, the driver must direct his gaze to the instrument panel. 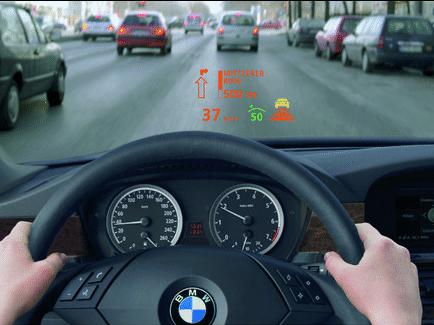 Head-up displays are projected directly into the driver's field of vision on the windshield. Technically, the vehicle information is shown on a TFT display, by means of lasers, mini-projectors or other high-intensity display technologies. From there, they are projected onto the windshield via lens and mirror systems. The mirror optics compensate for the curvature of the windshield and extend the path that the light travels from the display to the projection surface. This path is decisive for the distance at which the driver perceives the display so that eye focus does not have to change while driving. 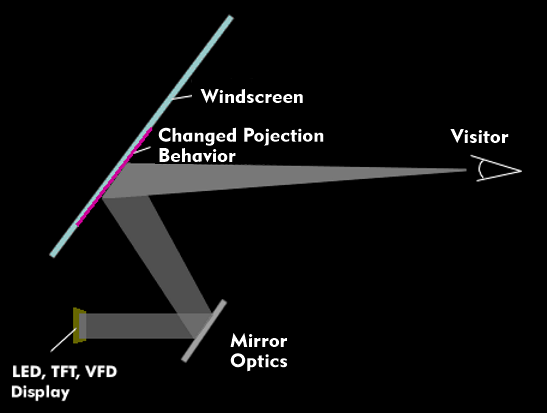 Principle of the head-up display. The display is projected onto the windshield via mirror optics.

An alternative to projection technology is transparent OLEDs, Transparent OLED( TOLED), which are attached to the windshield. With all technologies, it must be ensured that the HUD display is still clearly legible even in strong sunlight.