Frustrated Total Internal Reflection (FTIR) is a technique for touch-sensitive scanning devices such as those used in fingerprint scanners, touchscreens and multi-touch screens. FTIR is a technique based on light scattering and light reflections that can be used to accurately determine touch positions on the scanner surface. 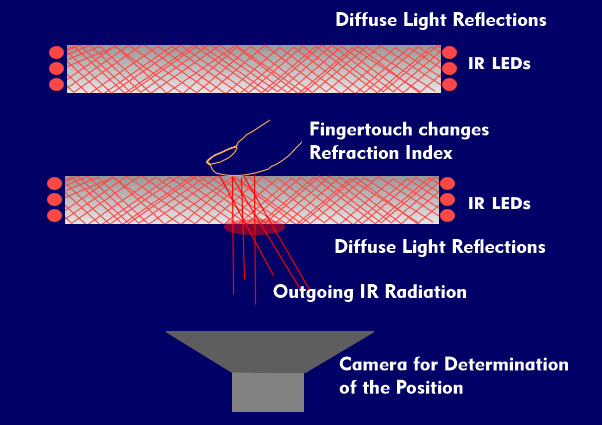 In order for the user to see where to touch the Plexiglas, the user interface and the application are projected onto the back. When touched, the infrared light emerges from the Plexiglas, and the position of the light emission is determined by a camera. One could also change the angle of reflection by bending an elastic Plexiglas pane by pressing on it with a finger.

There are several similar principles that work with light diffusion. Diffused Surface Illumination( DSI), for example, has a special acrylic plate as a diffuser, which provides uniform light distribution within the Plexiglas. In Diffused Illumination( DI), infrared emitters replace the externally mounted infrared LEDs and uniformly illuminate the Plexiglas pane from below.